The last chapter of the Encyclopedia talks cryptozoology.
What are the Kaodes? Where and why? And mostly: how?! 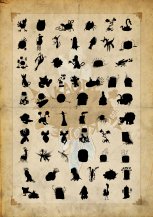 The Kaodes represent the wildlife of the Known World.

Historically, they used to be ideas and concepts that were stored by the pre-cataclysmic humanity in order to preserve the memory of Men. Or at least an attempt.
It is told that these ideas evolved within their enveloppe, the Kaodian crystals, until their atomic structure – as well as their appearance – would reflect the emotion, the memory or the expertise they were supposed to represent.

Fact is that there is a point when every traveler and inhabitant of the Known World grows a bound of friendship or repulsion with these creatures during their life.
The traveler makes sure to stock some of these incredible monsters and entities (who accepted to join him) in his personal crystal before going on his journey.

Kaodes are naturally and highly empathic, and they will join whom would match their own original idea. They are digital and organic beings at the same time, living and moving freely in the lands they settled in, on the different field-types of the Known World.

They still share a strong bond with their former enveloppe. They can be stored in theses crystals each citizen receives when he's born. These crystals have a storage limit and can only hold three Kaodes at a time.
If a traveler wants to change one of his active Kaodes, he'll have to be near a “Commutator”, a large-sized crystal one can found in some places. He can then access to his own Kaodian library (thank to his genetic code): a true gold mine of information (yes indeed!) about the Known World's creatures.

These creatures naturally set their nests and shelters around trees and other sorts of luxurious flora, thus enjoying the humidity, the oxygen and Co2, the shadows and shelters these wooded areas tend to offer.

These Kaodes prefer to live on higher grounds of the Known World, as they enjoy loneliness and the coolness of such peaks and caves; or the heat of volcanos and gas caps some mountains contain.

Ocean, seas, lakes etc. are filled with creatures that we imagine so terrible, so strange they can't walk on firm grounds... or they were simply inspired by pre-cataclysmic submarine creatures who need more water than others.

These Kaodes reprents the fauna (and sometime flora) of the most deserted lands of the Known World. Their particular need for shadows, damps and other miasma push them towards areas were a great wildlife swarms. These lands are often considered dangerous for isolated travelers.

The creatures living in the plains are always in contact with the human populations. They represent the common fauna of the civilized world, maintaining good relations with the groups and societies as long as they do not invade their territories without them agreeing first.

Jungles hold and develop all sorts of different lifeforms.
However, the Kaodes from these places are still a mystery for scientists, for one simple reason: only a few expeditions have dared to enter these territories with such dangerous and unexpected ecosystem...

At the end of a fight and during the day, it is possible for a Kaode to feel empathy towards you, and for it to join your team.
If you accept its friendship, it will go into your Kaodian crystal if this latter has one or two free spots, if not, in you Kaodian library (if there is a spot their too).

The Kaode's statistics and abilities are defined according to its own experience in the Known World before you two met, but you can now control its progress every time it levels up. 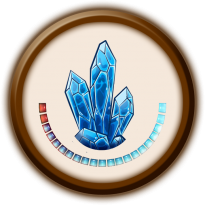 A happy Kaode will have better results and improve faster than average. A Kaode in the red however can decide to leave your group at any time.
To follow your creatures' state of mind, check their file regularly, or take a look at their Kaodian crystal

Finally, the longer a Kaode stays with you, the stronger his empathy towards you grows. 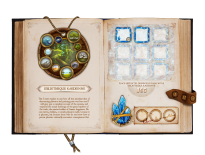 The Kaodian Library is a tool allowing you to store, manage and organize your team of Kaodes. You can access it anywhere, however you'll need a commutator in order to trade a Kaodian crystal for another in your data base.
Have a look at your creature's origin, field and weaknesses. Learn about their abilities and the way they can obtain and use them. Choose their progression and create unbeattable compositions.

The number of spots for new Kaodes in a Kaodian Library increases with its traveler's experience.